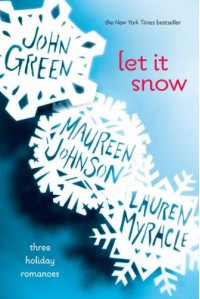 This is a most excellent read! Especially during the holidays! It has romance by the truck-load, fun witty dialogue, and a great cast of characters! This book was so great that I flew through it with no problems! All three authors did an amazing job at portraying each story individually as well as tying them up nicely together. You can tell that they worked hard to bring a magical Christmas read for the reader! I will review each story now and then give an overall review at the end.

The first story is called "The Jubilee Express" by Maureen Johnson and let me just say that I really did enjoy this story. I love the plot of being stranded in unfamiliar territory, realizing that people are not what they appear to be, and finding true love in the end. It was such a cute story. The main character, Jubilee, was just fun! She was so funny and full of life which is rare to see in a female lead. I did have a minor problem with her and that was when she went on and on about her boyfriend. Then again... most girls are like that. But other than that minor flaw, she was a great character. As was her love interest, Stuart! He was the sweetest guy in the entire novel! So cute and loyal! I just fell in love with him. Johnson's writing style was amazing! She has this way of simplistic writing but it flows so well and I just love how she brought this story together. I rate this story a four out of five.

The next story is called "A Cheertastic Christmas Miracle" by John Green and it's my favorite story out of all three! Green is a beyond amazing author! His writing is so much more advance than what I normally see in YA books. I fell in love with how he wrote this story! I love the classic story of falling in love with your long time best friend and the way he wrote it, it was not cheesy one bit! The three main characters; Tobin, the Duke, and JP; had fantastic chemistry! They were witty and funny and I couldn't get enough of them. The relationship Tobin had with the Duke was so sweet and hilarious! I was literally gushing throughout the entire story! I want to read it again and again because the romance was just the kind of romance that I enjoy: Non-Mush! Green has a wonderful sense of humor and I can see now why everyone loves his novels. This story gets a five out of five! Much love!

The third and final story is called "The Patron Saint of Pigs" by Lauren Myracle and, unfortunately, it was my least favorite. Not to say it was a horrible read it just wasn't as great as the two previous stories. I didn't particularly like the main character, Addie. She annoyed me throughout most of the story because of her selfishness and how she whined about everything and how she had that "poor me" sentimentality about herself and how... yeah, I can go on and on. I did not like her one bit. Also, the story focused a lot more on the "girly" aspect of things which is probably why I didn't like it as much because I am not one to talk about girl-things. Her boyfriend, Jeb, was... okay. I neither love nor hate him. There were things about him I liked and then there were things that made me think he was a douche. I don't know... I think I would have liked him more if he wasn't so distant but that's just me. Myracle did not have the best writing style out there. Sometimes I felt that she was writing for children only because the writing style seemed so juvenile. Maybe she's just not the writer for me. However, I will give her props to how she tied everything together in the end! That ending was just so sweet and perfect for a holiday novel such as this one! For that, this story gets a three out of five!

With all this said, this is a perfect read for the holidays! What I enjoyed the most was how all three stories intertwined with the other and that these three authors took the time out to make such a fantastic novel about holiday romances and worked so hard to have everything flow smoothly for each story and character! This has definitely become my most favorite Christmas novel and I will now make it a point to read it every single year during the holidays! This book gets a four out of five! I recommend everyone pick this book up and read it!
Tweet
735 BOOKS
Goodreads LeafMarks