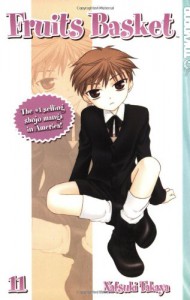 WHY!? JUST WHY!? HOW CAN ALL THIS BE HAPPENING!? IT MAKES ME SO UPSET! I CAN'T HANDLE MUCH MORE OF WHAT'S GOING ON HERE! Okay, people! Listen up! This volume has a whole bunch "WTF!?" moments! It's so filled with juicy new twists and turns! Hell, you even see some of the truth be revealed to you! Finally, right? Took long enough to find out what the "curse" really is. Don't worry. I won't tell you. I'll let you find out about that for yourself. But man... wasn't that crazy? I was so angry throughout most of the book (no thanks to Akito) and was at the edge, literally, at the edge of my seat because I just HAD to know what was going to happen next! ...I even fell off my chair because of the suspense! Oh, man! The drama! The drama! It hurts the brain but at the same time... IT'S JUST TOO GOOD!!!

Takaya-sensei!!! YOU ARE MAKING ME GO INSANE WITH WHAT YOU ARE DOING WITH THIS SERIES!!! IT'S TOO AWESOME!!! XD Whoa! The things that happen here. I'm at a lost for words. It was as if she decided to make this the big "HOT DAMN!" volume. Not only do we get to see more of some characters that we don't know much about yet but we also find out some secrets and we get little hints of what might happen in the future. I love Takaya-sensei's ability to be able to hint you along with what's going to happen. I feel that it tries to slowly put you into the position of the characters so that way... YOU'D BE EQUALLY UPSET AS THEY ARE!!! BAH! Why is some of this stuff happening? I don't get it! Well, I do but you know what I mean! And I must say, I love that she's also adding info about the lesser known characters (I said this in my last review, too, but I just can't help it). I now know Kazuma is a clutz! I guess that explains why he sucks at cooking! XD

TOHRU!!! *Blubbers* The poor girl. She went through so much in this volume. Only because her association with the Sohmas. If only someone would beat the crap out of Akito so that he would leave them all alone. But nooooo... Stupid bastard. Anyway, I really hope she finds a way to free the Sohmas. I want that just as much as she does. Yuki is really showing improvement. I'm shocked! He seems to be handling that freak well! I'm actually kinda proud of him! I hope he continues to get more awesome. (He's not as arrogant anymore. Keyword: as) Wah! Kyo! Oh my poor baby Kyo! Come here and let me cuddle with you because, damn it, you deserve it! Dude, I'm so happy he... said... something awesome! XD It made me squee with delight! And... he really is tragic... I want him to be happy! *Flails* I wish I could be more specific but I can't give spoilers! >_< Just know that... AKITO IS THE BIGGEST PRICK ALIVE!!! THIS IS NOT A JOKE! IT IS THE TRUTH! I HATE HIM! UGH! WASHING YOUR HANDS? REALLY? REALLY? YOU HAD TO GO THERE!? YOU JUST HAD TO GO THERE! IF ANYONE IS DISGUSTING, IT'S YOU, AKITO!!!

*Ahem* As you can see... I am not a fan of Akito. He's the main reason why I was pulling my hair out whilst reading this. Granted, if it wasn't for him, the series wouldn't be as entertaining... but that doesn't make me like him more than roaches. I still think he needs to be shot multiple times and thrown into the ocean but I digress. Let me change the subject into something more epic... WE GOT TO SEE RIN CLEARLY NOW! ISN'T SHE GORGEOUS? I love her! She's so pretty! Her sense of style is epic and as a Zodiac member (like you didn't know), wow! Elegant! I really can't wait until she's the main focus of what's going on. I think it's in another two volumes from now but whatever. I'm just happy we are getting to see her. A lot of the other characters were here, too. (Haru and Hatori included!!!) It made me glad to see them all hanging around together having fun. I will say this, though... they were all unhappy. I hated seeing that. They have so much pain... so much suffering... you really start wondering how in the hell are they going to find their happiness? Honestly, it's looking a bit hopeless but... Tohru made it her mission to break evil curse of the stupid so... there's some hope, right!?

Need I say how awesome this series is? Can you not see how fangirly I am over it? I'm so sucked into these characters that I just can't help but want more! More! I want to know what's going to happen next! The way this book ended... it leaves you wanting to yell and scream and tear down buildings! I know I'm still in the "WTF!?" mode. It's a good thing I get to continue this manga right after I finish this review. Otherwise... I think I'd go to the Corner of Woe with my Spork and just have a go at it. But that's not the case so HAHA! Alright. Enough of my sillyness. I need to get going and read the next volume already because Ima bout to 'splode from not knowing! I know you want to know too~ *Smirks* See you soon? Naturally! GO READ!!!
Tweet
735 BOOKS
Goodreads LeafMarks