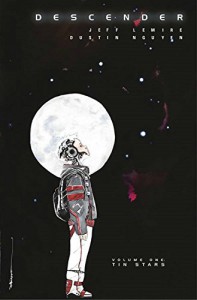 And now I am going back to comics. I am really having a lot of fun reading comics lately. I didn't read many last year so getting back into comics this year has been a real treat. I heard about Descender on BookTube. I heard it was a pretty good sci-fi novel so I thought I'd give it a try. And I'm so glad I did.

The story follows a boy named TIM-21. He's a robot who has been put to sleep for ten years during an attack by The Harvesters, a group of alien robots set to destroy everything! And the story takes off from there. I'll admit that it's not an original story. We have all seen stories about alien lifeforms threatening to destroy the world and one person being the key to prevent that from happening. However, I love the pacing of this story. It's taking a concept we are all very well familiar with and spinning it to fit this expansive world that Jeff Lemire is creating. The beginning of this volume introduces this world and its characters and sucks the reader in and by the end of it, you just want to keep reading. To find out where this ancient technology came from. I wish I had the second volume to read because I am super intrigued by what's happening so far!

The artwork is phenomenal! Dustin Nguyen mixes a realistic, soft style with watercolor and it just blows me away! I love how bright some panels are, with light blues and reds, but then it gets dark when the mood is right for it. He is able to balance the serious tone of the book without making it seem dreary. Well, there is a bit of gore... but it's not all bad! In fact, I think it's pretty cool! I am in love with his art and I cannot wait to see more of it in the future.

The characters are incredible! Especially the robots! I love the main character, TIM-21. He is sweet, caring, and empathetic towards his human counterparts. He has a dog-bot called Bandit and it's a DOG ROBOT! Need I say more? Then there's Driller who joins the team after he helps protect TIM from Scrappers, beings who try to get their hands on old parts to sell to the highest bidder. Driller is also loving and charismatic. He doesn't like humans very much, seeking to kill them since he is Driller the Killer, but TIM holds him back by teaching Driller to understand that some humans are there to help them. Still, Driller prefers not to put his faith in humans as much as he can, which isn't really a bad thing considering how humans react towards any sentient beings.

Speaking of humans, they are the ones who I didn't really connect with. There's Dr. Quon, the so-call "inventor" of the TIM series. He's a coward, a jerk, and plain compared to the robots. There's Telsa (although she is not really human), who is the captain of the UGC, an organization sworn to protect the universe from the Harvesters. She's tough, gets things done, and intelligent. My one complaint with her is that she keeps the reader at a distance. She does seem to have more than she lets on but as of right now, she's not letting anyone know who she truly is. My hope is that in future volumes, she allows for those around her into her heart. And the final character is Tullis, Telsa's second in command. We don't know much about him yet. Except that he's very loyal to Telsa and follows her every command without question. I'm sure we'll see more of him, too.

All-in-all, I really enjoyed this comic. I liked the premise, the atmosphere, the setting, the plot, and some of the characters. In fact, I would have loved this comic if some of the characters I mentioned above were a bit more fleshed out. Other than that, I highly recommend this comic. If you love sci-fi, alien races, fast-paced action, and a story we've seen time and time again done differently, then you should read Descender. Just keep in mind that there's a bit of gore towards then end, if that's something you prefer to avoid in your comics.

I really like this comic and I cannot wait to read more of it soon!