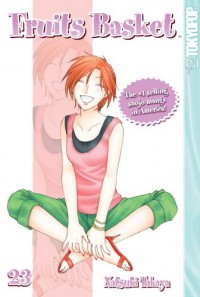 What a great way to end the series! This volume had everything you would want to see when finishing up a series. I am in awe! I was so glad seeing how everything turned out. All those questions you had before were answered and you got to see everyone's lives wrap up beautifully. The emotions, the plot, the characters, the artwork, and outcome was formed in such a way that you are cheering throughout the entire volume. Oh, and the romance! Do not forget about the romance! That is the key for this series! Totally had everything to do with how I feel towards this series. Man, I love it! I truly do! It's what makes me a very happy donut eater! X3

It's official. I am in love with Takaya-sensei. IN LOVE!!! Seeing how she brought us from volume one all the way to the last volume in such a fluid, smoothe, true to what she wanted out of this series way without destroying any of her characters, I'm impressed. Her art style is very beautiful because of her simplicity and her story is very much true-to-life, even if it does have some fantasy elements to it. One thing that I love about her is she's not afraid to show herself through her work. I feel as if I got to meet her because of her interactions with the reader through her side panels and even through the characters themselves. She's such a sincere person and funny as hell! I would love to get together with her and have a video game night party! She seems as if she would be a lot of fun to hang out with. The whole concept of this series came out of her head and she did wonderfully with it. I'm very glad that I was able to read this series. It is absolutely amazing. I give my thanks to Takaya-sensei for giving us such a beautifully created story for us readers. You could learn a lot from just reading Fruits Basket. It really helps you grow as a person... I know... I did. *Smiles*

I'm happy with how the characters lives turned out to be. Everyone had their fair share in the light and everyone literally got their happy ending. So don't fret, my friends! Do not fret at all! This entire manga is a huge spoiler! Big spoiler! I can't talk about anything in great detail or it'll all be over and done with. XP Instead, I'm going to do something a little different for this review. I will mention a character, say a word or two, and then move on to the next. That way, you'll know what to expect (more or less...) without me giving too much away. Besides, everything that happens in this volume is epic anyway. I'm only doing this as a way to get you motivated to read it! So! Let us begin this... uh... game? (Dude, you get more bizarre as time passes by.) Oh, shut your textual mouth! This is going to be fun! (Doubt it.) Don't knock it till you've tried it! (Whatever... just get on with it.) Right. Here goes!

Kureno: He's so sweet! Go home to love~ Uotani: Kickass! And making dinner~ Hee! Shishou: Wants grandkids... and possibly a relationship? He seems too out of it, though... Hanajima: Loves giving Kyo hell... has some goals up her own sleeve. *Smirks* Kisa: Getting along well with Hiro. <3 Hiro: I smell he's making progress! Ayame: He and Mine will be just fine. Kagura: Annoys the fuck out of me. -_-" I might actually dislike her more than... NOPE! I won't say it! >_< Rin: I know how she feels... it's hard to forgive. Haru: Still very much a silly boy who loves his girl~ Ritsu: Holy crap! He's a man! Manabe: Very much his mendoukusai self with his girl, Komaki. Hatori: Can finally smile happily... thanks to Mayu. *Smirks* Shigure: I'm glad he's found his happiness again. He's still a jerk but that's why we like him... or at least, I do! X3 Akito: ...very hard for me to describe. Don't like him... can't forgive him... but can understand him a bit more now. *Shrugs* Machi: Will always chase after her "Prince." Katsuya: Still gorgeous even after everything. Kyoko: I knew she wouldn't say something so horrible. At least now she's happy with him. Yuki: Taking a stand and being a man. He's grown so much. Kyo: The definition of a true man. Take her with you! Tohru: ...the best female lead in any shoujo manga. *Smiles*

There you go. I hope you can all get a better idea of what will come with this volume! (If anything, you just confused them more.) ...I really don't like you. (*Chuckles*) *Head/desk* ANYWAY!!! This is one of my favorite manga so I highly recommend the entire series. You will have plenty of laughs, cry many tears, and see yourself grow into a better person. It's one of those works of art that you must have always and forever because it is just THAT amazing. I'm... a bit sad to see it end... (For once, I agree with you.) ...but it's like Takaya-sensei said. It's not really ending. As long as we treasure and remember it always, it'll never truly be over! There are endless possiblities for these characters! We can still be a part of it! Thinking that way... I think it helps us part ways a bit easier, don't you think? (Sentimental much?) You know you're going to miss it, too. (...) *Smirks* I knew it. (Shut up.) *Giggles* Anyway, read this series, guys. This is just too good for you not to read it. Even the cranky guy behind the parenthesis says so! (Leave me alone.) Well, that's all for this review and series. It's been an epic journey we went on but it's time to say so long for now! (See you in the next review.) Wha-what!? You're going to stick around? (It's fun torturing you.) ... *Stares at reader* ...I'm so screwed... (*Smirks* Not yet, you're not.) *Falls over*

IT'S BEEN A PLEASURE! THANK YOU, TAKAYA-SENSEI, FOR THE AMAZING RIDE! JA MATA NE!!!
Tweet
735 BOOKS
Goodreads LeafMarks