Fence (Issue #1) by C.S. Pacat; Illustrated by Johanna the Mad 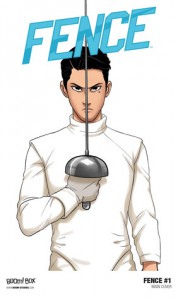 As you know (if you've been following my reviews for a while now), I am a huge fan of C.S. Pacat. I love her Captive Prince trilogy. Those are some of my favorite books of all time and since I've read them, I've decided that I will read everything else she has ever written in whatever form of media she chooses. So when I heard she was creating a comic about queer fencers, I pre-ordered my copy right there and then. When I discovered Johanna the Mad was the artist for this comic, I jumped for joy! Johanna is known in the fandom world for her many contributions to various different anime and manga. Basically, these two are a force to be reckon with and I was so excited to read their work.

Well, FENCE does not disappoint. I can't talk about it too much since it is the very first issue of the comic, but I will say this comic is everything I've hoped for. It's everything I love about sports anime, from the love of the sport to the rivalries to the ambition of always striving to do better! It's incredible! Plus, it's about a sport I know very little about: fencing. I love that the reader will not only be invested in the characters and their struggles, but they will also learn about fencing as a sport. I'm curious to learn more about fencing and seeing how the characters develop their skills.

Speaking of characters, we are introduced to the main two. Nicholas Cox and Seiji Katayama. Nicholas is a character who grew up in poverty, is a bit of a loner, and has an attitude but loves fencing. Seiji seems to be someone who has it all and is a bit full of it because of his talent. These two, naturally, butt heads and a rivalry ensues. I can tell these two are going to have quite the relationship. >:3

The artwork adds to the enjoyment of the story. It's so gorgeous and stunning! Johanna has done an amazing job at bringing these characters to life. Both C.S. Pacat and Johanna the Mad have worked really hard to bring this comic to life and it shows.

If you are a fan of any of these ladies, if you love their work, if you love sports anime, if you love queer content, then I highly recommend you check this comic out. It's such an amazing first issue and I am so looking forward to reading the other issues as they are released!